I have never bought something that someone promotes on TV. But, there is a first time for everything.

I was watching The View and one of their guests, Laurie David, was promoting her book, The Family Dinner. I was drawn to this book for two reasons: One, I had been diligently searching for some new menus because things were getting really boring in my kitchen and I was literally salivating over the stuff she had prepared for the show. Two, because not only did her book give menus but it also reminded me of being a kid. 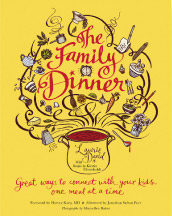 When I was growing up my mom always made us sit down to supper at 5:30 sharp every night. We had to turn the TV off (if cell phones had existed then there would have been a no cell phone rule.) I was in charge of setting the plates on the table and then each of my brothers and sisters had other jobs (I can’t remember any of them. But I know that someone was in charge of napkins, forks, cups, & something else.)

It is a tradition that Todd and I want to continue with our family. We actually sit down every night and hang out at the supper table. We ask Lboy questions about his day and even though all his stories come out sounding like garble, it is evident that he is telling us something and it is an important something. It is also extremely precious! I also know that it will lead to a future of us sitting down as a family and a great tradition of us to continue getting to know each other.

So, what does this have to do with Laurie David’s book? Well… her book isn’t about just menus, but it is mostly a book about creating family time to cook together, to sit down and eat together, and most importantly enjoy each other as a family. One of my favorite ideas I got from her was to have each person at the table tell one thing true from their day and one thing false from their day. Then the other people at the table have to pick which story they think was the true story. Todd and I have done this just the two of us and it is actually a lot of fun–think how much fun it would be with multiple people taking guesses!

A great recipe is the “Crunchy Chicken Schnitzel.” I made this recipe before I bought the book so that I could test it out (since I’m a tight budget I like to research as much as I can about something before I spend my money.) Todd, Lboy, and I all loved it, so I decided the book would be well worth the money.
The next recipe I’m going to try are the “Asian Shrimp Cakes with Sesame Asparagus.” I will let you know how it turns out.
I did not even begin to do this book justice. It is such a fun book, with lots of great ideas. If you are in need of an idea for a girlfriend for Christmas or are just looking to buy yourself a present, then you won’t be disappointed!
“If you can muster the energy for only one tool to
raising a healthy family, make it having family dinner.
This book will help you make those meals
easy, fun, and of lasting impact.”
~Tom Hanks~

Hello, I'm Kate, author behind the blog & matriarch of chaos, meal planning, family entertainment, & everything in between in the Mommy Monologues family. I started this blog in March of 2010 as a new mom and was looking for an outlet while trying to figure out motherhood. Blogging was great, exciting, new, wonderful & an awesome … END_OF_DOCUMENT_TOKEN_TO_BE_REPLACED