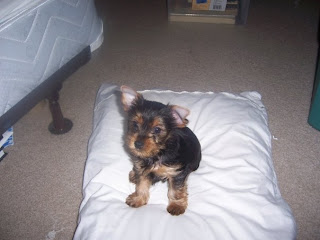 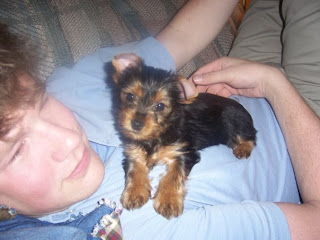 When I studied abroad in Spain, my host mom had a yorkie named Eloa. After meeting her I knew that I wanted a yorkie someday (so did my roommate and she has a yorkie now too.)

I started looking for a puppies about 6 months after Todd and I had been married. We lived in an apartment so I knew that we would have to have a small dog. I actually wasn’t looking for a yorkie, but found a breeder who sold some other kind of dog. She also happened to sell yorkies.

When my MIL and went to pick out some puppies, she brought out the other litter of puppies. But I didn’t really take to any of them. I asked her if I could look at the yorkies. She brought them out, all boys and one girl. They were all asleep except one. The one that wasn’t asleep was running all over the place and checking everything out, he had a great personality. My MIL said he was the one and I agreed.

BUT, I had to convince Todd of that first. You see, I was dog shopping and he didn’t really know that I was serious about wanting a dog. I came home, showed him pictures, and he said okay.

My cousin, Kelley, and I went to pick Giorgio up on Jan. 26, 2008. He weighed 2.2 lbs and was ferocious. He definitely thinks that he weighs 100 lbs and can take anyone–I love that about him! He sleeps in bed with us, he is great with Lboy, and now has a backyard made for kings of all dogs!

Todd and I always say that Giorgio is the best thing that we have ever bought. He is a handful, he is very high maintenance, but if I didn’t want a dog that was going to be that way then I shouldn’t have named him Giorgio Armani.

HAPPY BIRTHDAY GIORGIO!!! WE LOVE YOU!!!

Hello, I'm Kate, author behind the blog & matriarch of chaos, meal planning, family entertainment, & everything in between in the Mommy Monologues family. I started this blog in March of 2010 as a new mom and was looking for an outlet while trying to figure out motherhood. Blogging was great, exciting, new, wonderful & an awesome … END_OF_DOCUMENT_TOKEN_TO_BE_REPLACED